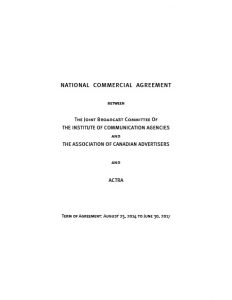 Note: In September 2020 an agreement was reached to extend the terms and conditions of the current NCA and the NCA L&R Addendum for a one-year period from July 1, 2020, to June 30, 2021. Read the media release for more information.

The Association of Canadian Advertisers, along with the Institute of Communication Agencies, negotiates the National Television and Radio Commercial Agreement with the Alliance of Canadian Cinema, Television and Radio Artists (ACTRA), which covers talent payment and working condition details for performers in broadcast commercials in English Canada. The current three-year contract runs until June 30, 2020, and covers such areas as Compensation for Use and Reuse, Talent Cycles, Work Permits, Casting and Auditions and Definitions and other working conditions.

The agreement addresses the majority of challenges facing Canadian marketers, building on the inroads achieved during previous negotiations. Updates include:

For more information about this publication or to access our confidential advisory services on this or related topics, please contact: